Russia's president had himself objected to the mosaic for the new church near Moscow. 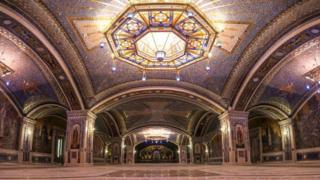 A controversial mosaic featuring Russian President Vladimir Putin will no longer be displayed in a new Russian military church after the president himself objected to it.

Mr Putin was depicted alongside his defence minister, the head of the FSB security service and others.

The bishop in charge of the mega-church near Moscow said the mosaic was now likely to be dismantled.

Another mosaic shows women in front of a sign reading "Crimea is ours".

Ukraine's Crimean peninsula was annexed by Russia in 2014.

The church is to mark 75 years since the Soviet victory in World War Two.

But when the designers included an image of President Putin, it seems they went too far. When that became public - and controversial - the Kremlin said Mr Putin didn't approve.

Celebrating his team's achievements was premature, a spokesman said. And the mosaic was promptly removed.

It's not clear whether the Crimea image, or a depiction of Joseph Stalin were also removed.

Stalin is shown on a banner at the Victory Day parade of 1945, the very moment the military church celebrates.

The new church was supposed to be unveiled on the anniversary, 9 May, but the coronavirus epidemic has put all Russia's Victory Day plans on hold.