Contact-tracing is considered crucial to get the US back on track. California is one of the first to take the challenge on

San Francisco has assembled an army of librarians, social workers, attorneys, investigators and medical students to find and warn anyone and everyone who may have been exposed to Covid-19.

Large-scale tracing efforts have been proven to work in other countries, including South Korea and Germany, and are considered crucial to get the United States economy back on track. But tracing efforts in a nation as large and diverse as the US come with unique challenges, and California, the country’s most populous state, is one of the first to start to take those challenges on.

San Francisco has assembled an army of librarians, social workers, attorneys, investigators and medical students to find and warn anyone and everyone who may have been exposed to Covid-19.

Large-scale tracing efforts have been proven to work in other countries, including South Korea and Germany, and are considered crucial to get the United States economy back on track. But tracing efforts in a nation as large and diverse as the US come with unique challenges, and California, the country’s most populous state, is one of the first to start to take those challenges on.

To set up an effective contact tracing program, California will have to increase its health department staff five or 10-fold, experts told the Guardian. The state is eventually planning to recruit 10,000 tracers, according to Gavin Newsom, the state’s governor – and test up to 80,000 people each day, relying on paid health workers and volunteers. But some municipalities are ahead of their curve, and are already beginning to recruit and train tracers.

Putting in place a system for tracing and tracking the contacts of people who have tested positive is a “is an absolute essential pillar we need to build up and put in place before we even think about reopening the country”, said Susie Welty, a global health expert at the University of California, San Francisco (UCSF), who is helping build the contact tracing program in the city.

Despite its techie reputation, San Francisco has so far eschewed smartphone tracking and contact tracing apps in favor of old-fashioned phone calls. Experts from UCSF have recruited more than 100 city workers who cannot do their regular jobs under the current shelter-in-place rules, taught them healthcare privacy laws, and coached them on how to call Covid-19 patients, assess their needs and ask them about any recent interactions with family, friends and neighbors.

Without revealing the infected person’s identity, trackers call everyone they may have interacted with and ask them to self-quarantine for 14 days. “We know this is really stressful and onerous to the people we call,” said Dr Mike Reid, an assistant professor in infectious disease at UCSF who is leading the city’s contact tracing efforts.

Tracers help connect sick or exposed people to any healthcare services they may need, offer to have the city deliver them food and medicine while they’re in quarantine, and offer them a hotel room if they are unhoused or unable to isolate from family members at home. Right now, the city has the capacity to offer tests to everyone with symptoms, Reid said – but ideally, medical centers will also be able to test everyone who may have been exposed to the virus, regardless of whether they look sick.

“Look, we’re just getting started here. This is early, early days,” Reid said. “But the idea is we’ll slowly build up our capacity to trace and test so that we’re prepared for when everything opens back up.”

With stringent distancing measures in place, the job has been relatively manageable, Reid said. The average San Franciscan has only three or four contacts – and they’re usually family members. But once bars, restaurants and other workplaces reopen, contact tracing will be essential to quickly catch and contain new outbreaks. Testing will also have to be scaled up. 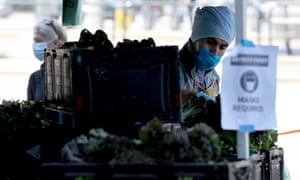 A vendor picks produce for a customer during the Ferry Plaza Farmers Market in San Francisco. Photograph: Justin Sullivan/Getty Images

To do so effectively, California will have to meaningfully address inequalities that have baked into society long before the pandemic hit, reaching unhoused and undocumented people who are most vulnerable to illness, and least able to access health services. The state has a shaky record, failing to protect unhoused and incarcerated populations throughout the pandemic.

“The systematic biases in our society leave Latino workers most vulnerable to the coronavirus,” said David Hayes-Bautista, a professor of public health and medicine at UCLA. “And these are the people who are going to be hardest to contact trace.”

Immigrant communities are justifiably worried that each time they share information about their status and location, “it will come back to haunt them,” Hayes-Bautista said. “It makes sense that people are scared.”

Local governments can make sure people feel safe and protected by deputizing local non-profits and indigenous and immigrant rights advocacy groups to help in the tracing efforts, he said.

In rural Madera county, where the local officials have deputized sheriffs in plainclothes to contact trace from the very beginning of the outbreak in early March, officials have taken care to avoid asking anyone about their immigration status and reassuring residents that their health information will remain confidential, said Sara Bosse, the county’s public health director. In the farming community, where more than 50% of residents identify as Hispanic or Latino, the city has also partnered with community health organizations to reach unhoused and other vulnerable populations.

San Francisco has similarly publicized that the contact tracing is “voluntary, confidential, and culturally and linguistically appropriate. Immigration status will have no bearing on these conversations.”

Nationally, the US still has a long way to go before contact tracing can become a reliable part of the strategy to reopen. “The existing public health system is currently capable of providing only a fraction of the contact tracing and voluntary self-isolation capacity required to meet the Covid-19 challenge,” a prominent group of public health officials wrote Monday in letter to House and Senate leaders, noting that lawmakers would need to allocate an additional $46bn to tracing and isolation efforts.

Nationally, at least 100,000 contact tracers will be needed to see after Americans who have fallen ill, or have been exposed, according to the National Association of County and City Health Officials. Others estimate that a workforce of 180,000 to 300,000 will be required.

Dr Joia Mukherjee, the chief medical officer at Partners in Health in Massachusetts, who is leading the nation’s first statewide contact tracing effort there, said she’s found that calling and educating everyone who may have been exposed to the coronavirus is especially important right now, in the US.

Mukherjee, who has worked to fight outbreaks and pandemics around the world, pointed at anti-lockdown protests and misinformation swirling online. “Proven scientific fact about an infectious disease was completely shunned and mocked by the president,” she said. “So we need to make sure people have the information they need to stay safe.”