Sex and sensibility: the photographers capturing a new American youth

When Peyton Fulford looks at her photograph Backbend, she sees gender fluidity in motion. A body arches over a bag of pink grapefruit, the white underwear and bare legs curving across the golden landscape in a defiant pose that is both playful and strong – yet also ambiguous.

“I wanted to tell a story and for people to question the figure in the image,” the 25-year-old photographer says from Atlanta, Georgia. “Whether it’s a man or a woman or a non-binary person.”

When Peyton Fulford looks at her photograph Backbend, she sees gender fluidity in motion. A body arches over a bag of pink grapefruit, the white underwear and bare legs curving across the golden landscape in a defiant pose that is both playful and strong – yet also ambiguous.

“I wanted to tell a story and for people to question the figure in the image,” the 25-year-old photographer says from Atlanta, Georgia. “Whether it’s a man or a woman or a non-binary person.”

It was this backbend that kickstarted Fulford’s inquiring 2016 series Infinite Tenderness, an ongoing photography project that explores sexuality and intimacy in America’s deep south, where there’s little freedom for exploration if you are a LGBTQ+ youth. Peyton grew up in a strict religious household in Albany, a small city in south-west Georgia. Her mother was raised in the Sanctified Holy Church and her father identified as Southern Baptist. “I didn’t feel like I could come out as myself,” Peyton says. “I had to repress a lot of myself during that time.” 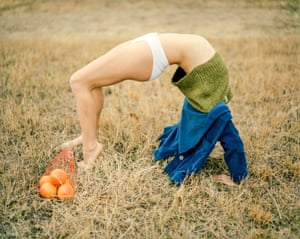 ‘I wanted to tell a story and for people to question’ … Backbend. Photograph: Peyton Fulford

Photographing friends helped her to understand her own sexuality and gave her a sense of belonging at a time when she felt entirely disconnected from her surroundings. “I realised that there were people out there that I could connect to,” she says.

When Peyton’s project was awarded the Firecracker photographic grant in 2018, it gave her a stamp of approval, as well as enabling her to buy the film she needed. Over the last eight years, the non-profit initiative has awarded one international female or non-binary photographer an annual £2,000 grant – although this year, in light of the Covid-19 pandemic, it will award six photographers with smaller contributions. 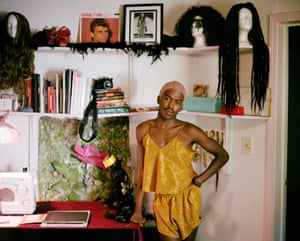 Last year’s grant winner, Sabine Ostinvil, bought her first digital camera with her cheque. “I wasn’t focused on making beautiful photographs,” the 20-year-old says, reflecting on her series, Magik, from her residence halls at Columbia University in New York. Ostinvil started taking pictures of her two younger brothers when she was 14. Photographing them feels more real to her than any other subject, she says – intimate pictures without any particular aesthetic that have kindled conversations about race and black masculinity.

“I don’t aim to make images that say something politically or socially,” she tells me, “but because they’re black boys they immediately say that – and I’m very conscious of it.” Ostinvil emigrated from Haiti to the United States in 2005 and so her documentation of their boyhood is also a meditation on the immigrant experience. Like Fulford, Ostinvil grew up in a very religious household and her childhood was divided between home, church and school, with little room for deviation. She wonders whether her brothers’ adolescent journey will be the same as hers. “We don’t talk about race relations in the house,” Ostinvil says. “We don’t talk about police brutality and what it means to be a black boy in America.” 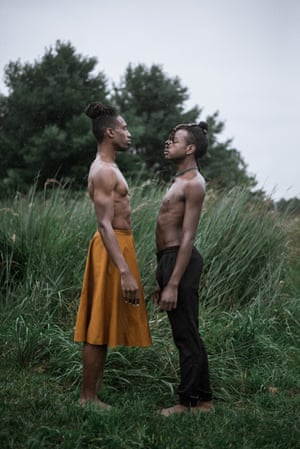 Striking … a photograph from Sabine Ostinvil’s Against the Tension series

Perhaps her most striking series is a collection of photographs called Against the Tension, taken in Gwynedd Valley, an hour’s drive north of Philadelphia. In them, two topless men face each other against a backdrop of wild reeds and alabaster sky. One is wearing an orange skirt, the other is dressed simply in a pair of black trousers, his only adornment, a sparkling green necklace. Their gaze takes us away from a meadow during a thunderstorm to somewhere else entirely. “I was just looking at these men thinking, wow, they’re absolutely stunning. I don’t see images of black men like that often in the media. It just felt super-powerful to me,” she says. One of Ostinvil’s models was a customer in a vegan restaurant she was working in at the time. He suggested the skirt. “You just don’t expect to see a black man wearing a skirt,” she muses over the phone two years after the shots were taken.

Ostinvil’s photographs aren’t just about the figures themselves but the spaces that they hold and the questions that this inevitably raises about freedom and self-expression in America. It’s a juxtaposition mirrored in Fulford’s images of tender outsiders. They may be navigating their surroundings in abandoned fields and private homes, but they do so with a palpable sense of community and connection.

Fulford tells me that the title Infinite Tenderness was inspired by a cinematic quote from the coming-of-age love story, Blue is the Warmest Colour (“I have infinite tenderness for you. I always will.”) “Each individual in this series is dependent on another for support and understanding of their ever-changing identities,” she says. In this sense, these images bind them together. Each one is a moment caught in time. An everlasting union that ensures their experiences will never be lost.