Spain and Germany deal blow to hopes of tourism revival

Spain has ruled out any early reopening of its tourism sector and Germany is set to extend a travel warning for all leisure trips abroad until mid-June, casting further doubt on when would-be holidaymakers will be able to venture abroad again.

With airline fleets mostly grounded, cross-border train traffic slashed and many EU countries, including France, requiring all arrivals bar their own citizens to formally justify their journey, leisure travel within Europe is at a near standstill.

Spain has ruled out any early reopening of its tourism sector and Germany is set to extend a travel warning for all leisure trips abroad until mid-June, casting further doubt on when would-be holidaymakers will be able to venture abroad again.

With airline fleets mostly grounded, cross-border train traffic slashed and many EU countries, including France, requiring all arrivals bar their own citizens to formally justify their journey, leisure travel within Europe is at a near standstill.

Arancha González Laya, Spain’s foreign minister, said on Wednesday visitors would be welcomed back to the country – which has suffered Europe’s highest Covid-19 death toll after Italy – only when it is safe for them to come.

“Spain always gives its visitors the warmest possible welcome and wants to do so under the best possible safety conditions,” she said. “That is why Spain will gradually open to tourism when it’s in a position to guarantee tourists’ safety.”

The country’s health emergency coordinator, Fernando Simón, said the “R rate” – the average number of infections that one person with the virus causes – was below 1.0 in almost all areas of the country.

“The evolution we are seeing is still very favourable and is in line with what we expected,” Simón said, with the daily number of deaths down sharply from the record 950 of early April.

As EU commissioners debated plans to help Europe’s stricken tourist industry, which makes up nearly 10% of the bloc’s economy, and transport ministers discussed harmonising lockdown exit plans, González Laya said Madrid was “working with our EU partners. As soon as possible, we’ll welcome people with open arms, as is the Spanish way.”

The socialist-led coalition government has announced a four-phase transition towards “the new normality” focusing on hitting landmark targets rather than meeting deadlines and with decisions taken on a province-by-province basis, meaning areas less affected by the virus will return to normal earlier.

Meanwhile the German cabinet was expected on Wednesday to extend a travel warning for all tourism trips abroad until at least 14 June. “We have not yet reached the point where we can recommend carefree travel,” said the foreign minister, Heiko Maas.

France, which already expects all inbound passengers to state an essential reason for their journey, made no mention of international travel in its detailed roadmap out of lockdown, presented on Tuesday by the prime minister, Édouard Philippe.

But Philippe said France’s staggered “deconfinement”, beginning on 11 May, would vary from area to area depending on the number of cases, restricting travel even within France’s regions. Only those on urgent professional or personal business will be able to travel more than 100km (60 miles) from their homes at least until 2 June.

Underlining the hurdles to foreign travel, Russia’s prime minister, Mikhail Mishustin, extended an entry ban on foreigners that was introduced in mid-March and set to expire on Wednesday, saying it would be maintained “until the fight against the infection is over and the epidemic situation has improved”.

Vladimir Putin warned on Tuesday that Russia had not yet reached the peak of infections, and extended lockdown measures for two weeks. In a video conference with regional governors, the president said Russia had managed to slow the spread of the pandemic, but cautioned that “this should not reassure us”.

As governments across Europe continued to wrestle with the dilemma of how best to lift confinement measures that are exacting a disastrous toll on their economies while avoiding a dangerous second wave of contagion, Germany on Wednesday made face masks mandatory in all shops, which began reopening last week. 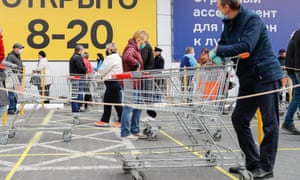 People queue at the entrance to a store of the Baucenter home improvement retail chain in Kaliningrad, Russia. Photograph: Vitaly Nevar/Tass

Nose and mouth coverings are already compulsory on buses, trains and trams in Germany and will become so in France from 11 May, when people will again be free to leave their homes providing they observe strict physical distancing.

According to the Johns Hopkins University tracker, the coronavirus has infected more than 3.1 million people worldwide and killed nearly 218,000. The US reported its millionth case, and at more than 58,000 its death toll is by far the world’s highest, surpassing the number of Americans killed in the Vietnam war.

Italy, Spain and France have been the worst affected countries in continental Europe, with each reporting more than 23,000 deaths. But daily death tallies and infection rates appear to be on a broadly downward trend, and many countries have begun gradually lifting restrictions.

China, where the pandemic originated, appears to have the virus under control, with no new deaths reported for two consecutive weeks and confirmed fatalities at about 4,600, although experts have cast doubt on the accuracy of its figures.

State media said on Wednesday the country’s top legislature would hold its annual meeting, postponed for the first time in decades, from 22 May, in a move widely interpreted as signalling that Beijing believes it has contained its outbreak.

India’s confirmed death toll passed 1,000 on Wednesday, but the numbers remain low compared with Europe and the US in a phenomenon that is puzzling experts. With huge slums and a less than perfect healthcare system, there were fears India would be ravaged by the pandemic.

But the country, which imposed a strict lockdown on its 1.3 billion people on 25 March when it had recorded just 10 deaths, has so far avoided the devastation seen in many other nations. However, its overall death toll of 1,007 could be far lower than the real number of victims owing to a lack of testing and other factors.