Mekdad takes on the role of top diplomat while the Syrian government remains largely isolated internationally.

Mekdad takes on the role of top diplomat while the Syrian government remains largely isolated internationally.

Syrian President Bashar al-Assad has appointed Faisal Mekdad as new foreign minister, replacing Walid al-Moallem who died almost one week ago, according to a statement by the presidency.

Moallem, a stalwart of the al-Assad government who held his job through a decade of conflict and several reshuffles, died on Monday at the age of 79.

The government announcement did not specify the cause of his death, but his health was understood to have been deteriorating for some time.

His 66-year-old successor, Mekdad, started a career at the Syrian foreign ministry in 1994 and has been deputy foreign minister since 2006.

He accompanied Moallem to most meetings and conferences, and stepped in to make statements when the latter’s health started to deteriorate.

Mekdad, who holds a doctorate in English literature from Charles University in Prague, was born in 1956 in Ghasam village in the southern province of Deraa.

In 1995 he joined the Syrian delegation to the UN, and was his country’s permanent representative to the UN from 2003 to 2006 before he became deputy foreign minister.

In May 2013, gunmen abducted his then-84-year-old father Walid Mekdad before freeing him weeks later in exchange for rebels releasing 43 prisoners.

Mekdad takes on the role of top diplomat while the Syrian government remains largely isolated internationally, despite recent efforts to normalise ties with Gulf countries.

Seven years after severing diplomatic ties, the United Arab Emirates reopened its embassy in Damascus in 2018, followed by Bahrain.

Al-Assad and Abu Dhabi’s Crown Prince Mohammed bin Zayed Al-Nahyan spoke on the phone in March for the first time since Syria’s war erupted in 2011.

Mekdad will be assisted by Jaafari who has been the fiercest defender of the Syrian government at the UN since 2006, even more so after the onset of the conflict in 2011.

Born in 1956, Jaafari, who is married to an Iranian, hails from Damascus and belongs to the same Alawite religious minority as Assad. 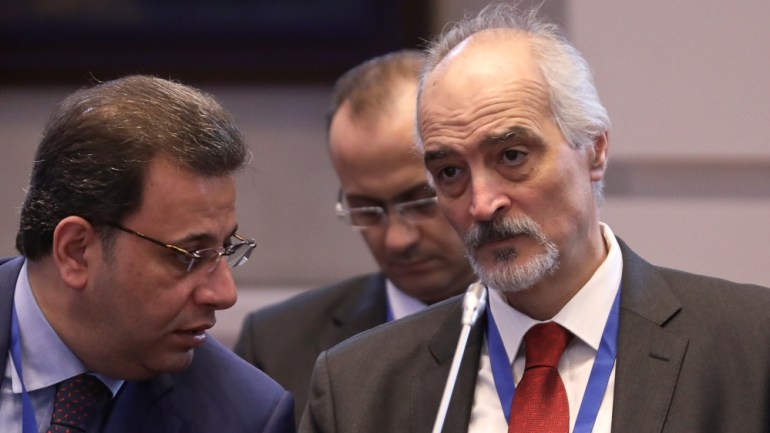 Mekdad will be replaced as deputy foreign minister by Syria’s ambassador to the UN, Bashar Jaafari, right [File: Mukhtar Kholdorbekov/Reuters]Jaafari holds degrees in French literature and translation, a doctorate in political sciences from the Sorbonne University in Paris and is also fluent in English and Farsi, in addition to his native Arabic.

His first diplomatic posting was to Paris, later moving to positions in New York and Indonesia.

Al-Assad’s bloody crackdown on peaceful protesters in 2011 sparked a conflict that has now lasted almost a decade, killed more than 380,000 people and displaced millions at home and abroad.