'This moment is leaving a mark on me': framing Rio under Covid-19's shadow

Photographing a funeral is never easy, no matter how professional the photographer, and even more so amid a pandemic. But for Nicoló Lanfranchi, capturing the burial of Covid-19 victim Elizabeth Baez, 82, which took place this month at the São João Batista cemetery in Rio de Janeiro, was especially difficult.

As he photographed the gravediggers in protective clothing with Elizabeth’s son Henrique, 49, the only mourner allowed, watching on from behind a mask, Lanfranchi thought of his own father, Piero. At 72, Piero was in intensive care with Covid-19 in a hospital in Voghera, in Lombardy, northern Italy – one of the worst-affected places on Earth.

Photographing a funeral is never easy, no matter how professional the photographer, and even more so amid a pandemic. But for Nicoló Lanfranchi, capturing the burial of Covid-19 victim Elizabeth Baez, 82, which took place this month at the São João Batista cemetery in Rio de Janeiro, was especially difficult.

As he photographed the gravediggers in protective clothing with Elizabeth’s son Henrique, 49, the only mourner allowed, watching on from behind a mask, Lanfranchi thought of his own father, Piero. At 72, Piero was in intensive care with Covid-19 in a hospital in Voghera, in Lombardy, northern Italy – one of the worst-affected places on Earth. 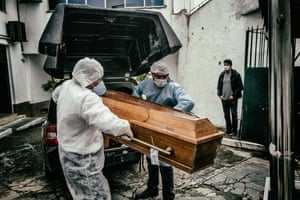 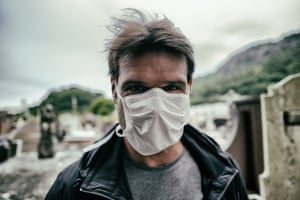 “I imagined myself in the same situation, and I started facing this possibility and I was really touched,” he says. After the funeral, Lanfranchi told Baez about his father. Baez thanked him for capturing his mother’s lonely burial – and for sharing his own story.

That Brazilians – a sociable, gregarious people - are so open to brief yet profound human interactions like this is just one of the many reasons Italian photographer and film-maker Lanfranchi has returned here every year for the past two decades. The other is to take pictures.

“It is a huge life school for me. I have to be focused, it is dangerous, no one can help me and I feel responsibility to bring back images and the stories,” he says. “It cleans my mind.” 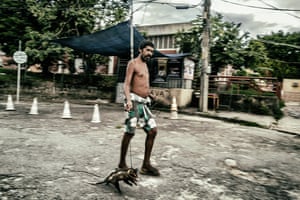 Born in Milan and based in Berlin, Lanfranchi has worked as a freelance photographer in portrait, travel, news, and photojournalism. He prefers to spend time on assignments; he once spent three weeks on board the Aquarius ship as it rescued refugees around the Mediterranean for a series of Guardian dispatches.

Coronavirus has been one of the toughest subjects to cover. “I’ve been worried about the virus,” he says. “My father was on my mind.” 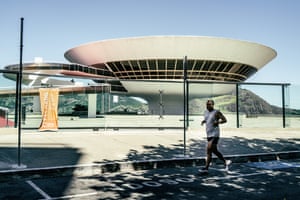 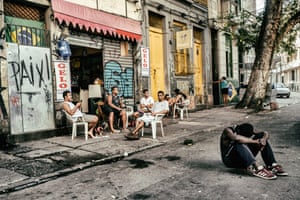 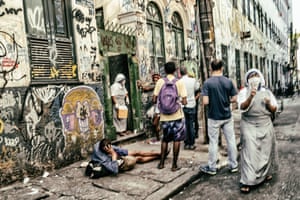 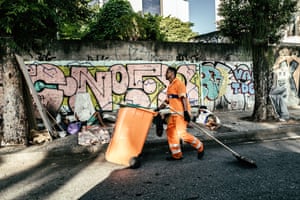 Lanfranchi first came to Brazil in 2000 because he practises the Afro-Brazilian art of capoeira and came to be “baptised” in an initiation. Originally developed by enslaved African people as a martial art disguised as a dance, capoeira is an example of how this vast, varied country absorbs cultures.

“Other people call this a melting pot. It is more the syncretism, the capacity of an organic form to absorb different things,” says Lanfranchi. 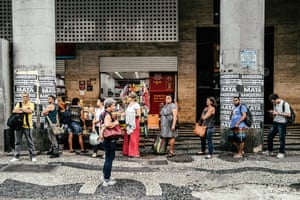 In 2012 he photographed wildcat miners in the jungle, in 2014 a soccer tournament in a prison in João Pessoa. In 2015 Brazil suffered the worst environmental catastrophe in its history when a tailings dam near Mariana collapsed, killing 19 people and sending millions of litres of mining waste sluicing down the River Doce to the sea.

Lanfranchi worked with Greenpeace, Amnesty, Vanity Fair and eventually supplied dramatic images images for a Guardian story that Davilson Brasileiro and I wrote about an investigation into the disaster’s causes by federal prosecutors. 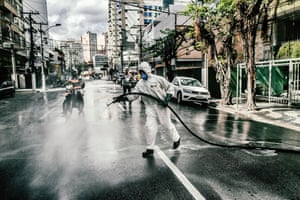 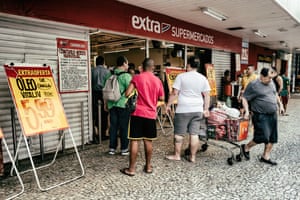 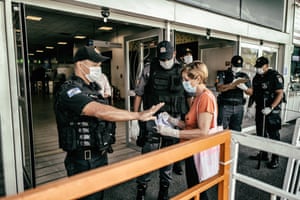 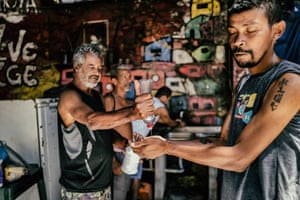 In January 2019, Lanfranchi and I had just left the Raposa Serra do Sol indigenous reserve in Brazil’s far north when another tailings dam collapsed, in Brumadinho in the same state of Minas Gerais, killing hundreds. At the disaster zone, Lanfranchi’s persistence, his ability to charm and cajole, and his skill at composing photographs in chaos rendered memorable images of the deadly, avoidable tragedy. 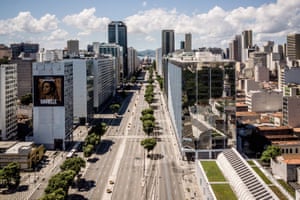 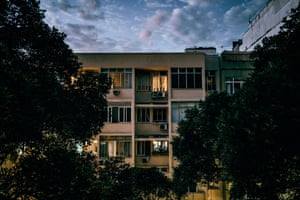 He arrived in Rio on 3 March to make a short film about traditional medicine in Brazil’s semi-arid interior, but the pandemic shelved the project. Isolating in Rio’s beachside Ipanema neighbourhood, Lanfranchi discovered that the great composer Tom Jobim had written many of his bossa nova classics in an apartment in his building, including Chega de Saudade (Enough of Longing), most famously recorded by João Gilberto.

That nostalgia infected Lanfranchi and he sought to take photos that captured time standing still and the fearful melancholy of a city where life was on hold.

He bought N95 masks, found a driver who knew the city and began working out how to photograph the pandemic when so many situations – health centres and hospital wards – were inaccessible. He cleaned his equipment with alcohol gel, and changed and washed his clothes each time he got home. 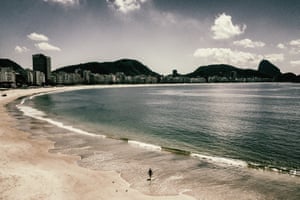 Using a drone worked for photographing empty beaches and an upscale members’ club for a story on how coronavirus spread among its privileged members. He also used it to capture families on their balconies.

He put the drone down to capture food distribution in the City of God favela, street sanitation in nearby Niterói, and people ignoring social distancing advice across Rio. 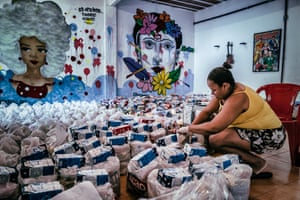 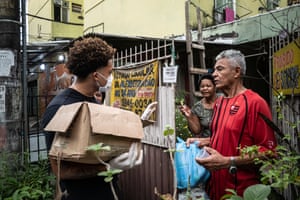 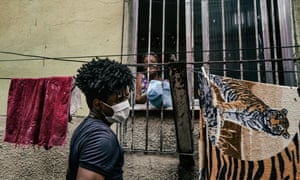 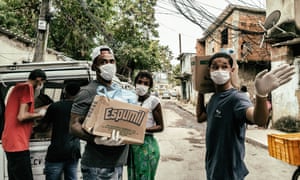 Some did this from sheer economic need, others didn’t take the pandemic seriously. The country’s far-right president, Jair Bolsonaro, dismissed coronavirus as “a little flu” and argued that protecting the economy was more important than social distancing even as confirmed coronavirus cases and deaths rose. 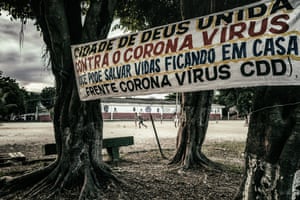 Lanfranchi was dismayed to see Brazilian solidarity corroded by fake news and far-right populism. “I felt how sick the country is, people are supporting a president who openly does not care about the health of the population,” he says. 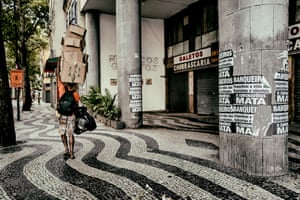 This disconnect resonated as his father’s health worsened. Piero Lanfranchi had gone to hospital to get a plaster removed but caught Covid-19. Father and son communicated via text, until the time came for a plastic box to be put over Piero’s head to help him breathe and he sent a last message. 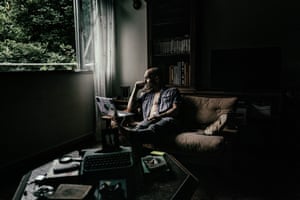 Lanfranchi could not have seen his father even if had been able to get a flight back to Italy. Hospital visitors are not allowed, there are road blocks in Lombardy. On Saturday he got the news: despite the plastic box, his father had died.

“He was alone, this is the worst thing, and something I wouldn’t wish on anybody,” says Lanfranchi, tears cracking his voice.

Now the only thing he can think to do is plan a new assignment.

“This is a historical moment, it is leaving a mark on me, and in a certain way I think about the other families affected with this, and I am with them,” he says. “I do not want to be beaten by the virus.”