Tottenham Champions League- Fans in Amsterdam get rowdy before game

The North London lads took over entire areas of the city centre and were also seen brandishing a giant inflatable penis, throwing beer in the air, and climbing on each other's shoulders.

Hundreds packed out one square, singing and chanting a version of Allez, Allez, Allez around 6pm, ahead of kick-off at 8pm.

They are in the Dutch capital to play Ajax for a place in the Champion’s league final and chance to take the highest accolade in European football.

The team trail the Dutch giants by one goal, after losing to them 1-0 in London during the first leg of the showdown last week.

Tottenham are set to be boosted by the return of star striker Heung-min Son, who has now served a ban following a red card. 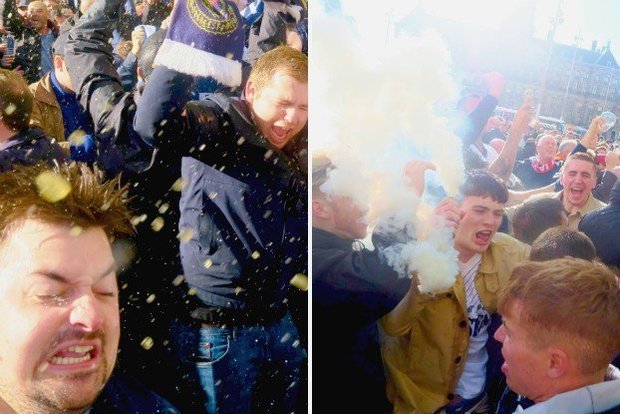 However, England hero Harry Kane is still out with an injury.

Last night Liverpool beat Barcelona at home to go through to the final, coming back from three goals behind after the first leg.

This comes as Spurs manager Mauricio Pochettino revealed he turned down the chance to coach Real Madrid last June in order to honour his contract with the London club, saying that leaving Spurs in the lurch would have gone against his values.

FLAIR: The pyrotechnics were brought along (Pic: REUTERS )

PARTY: They filled the square from corner to corner (Pic: REUTERS)

Pochettino, 47, said in an interview with El Pais published on Wednesday that he was offered the role.

"It was a difficult situation because the dream of any coach was at stake – coaching one of the biggest clubs around. And I had to say no, that was tremendous," he was quoted as saying.

"It created a conflict because you know that if a coach wants to leave, he will leave, but I had just signed a new contract with Tottenham and I felt that I couldn't do anything."

CLASH: The are aiming to get into the final (Pic: REUTERS )

POLICE: The cops were watching on incase of trouble (Pic: REUTERS )

Pochettino joined Spurs in 2014 and is one year into a new five-year deal at the club who have moved into a new stadium.

Julen Lopetegui was eventually named Real coach, a decision which saw him sacked as Spain manager on the eve of the 2018 World Cup, but he was fired by Real at the end of October.

Santiago Solari then took charge of Real until he was sacked in March, when Zidane made a sensational return to the club.

Related articles
Source: https://www.dailystar.co.uk/news/latest-news/777567/tottenham-champions-league-amsterdam-ajax-rowdy-football-fans-rowdy-beer-sing
(0)
0.0
Dislike 0
ОТН 960
Like 0
Someone is typing...