US defence chief visits Vietnam to shore up support in Asia

Maritime issues in the South China Sea, COVID-19 response expected to be discussed during Austin's stop in Hanoi.

United States Defense Secretary Lloyd Austin is in Vietnam looking to bolster security ties with Hanoi, one of several Southeast Asian nations embroiled in a dispute over the South China Sea.

Austin is scheduled to hold meetings with his counterpart, Phan Văn Giang, as well as with Vietnam’s President Nguyen Xuan Phuc and Prime Minister Pham Minh Chinh on Thursday.

Earlier on in the day, he made a stop at the site where the late US Senator John McCain’s plane was shot down in 1967. McCain, the 2008 Republican nominee for president, was a prisoner of war in Vietnam.

Since the Vietnam War, ties between Washington and Hanoi have been slowly deepening as both countries watch Beijing’s activities in the South China Sea with growing alarm.

Vietnam has emerged as the most vocal opponent of China’s territorial claims and has received US military hardware, including coastguard ships.

“[Vietnam] wants to know that the US is going to remain engaged militarily, it’s going to continue its presence in the South China Sea,” Greg Poling, of the Center for Strategic and International Studies, told the Reuters news agency.

On Wednesday, a US Navy warship transited through the Taiwan Strait, angering Beijing.

Before arriving in Hanoi, Austin also made a stop in Singapore, his first in the region since joining the administration of US President Joe Biden.

In a speech in Singapore, he said that the US is committed to pursuing a constructive, stable relationship with China, including stronger crisis communications with the People’s Liberation Army.

But he repeated that Beijing’s claim to virtually the entire South China Sea had “no basis in international law” and “treads on the sovereignty of states in the region”.

China claims almost the entire resource-rich sea, through which trillions of dollars in shipping trade passes annually, with overlapping claims from Brunei, Malaysia, the Philippines, Taiwan and Vietnam. 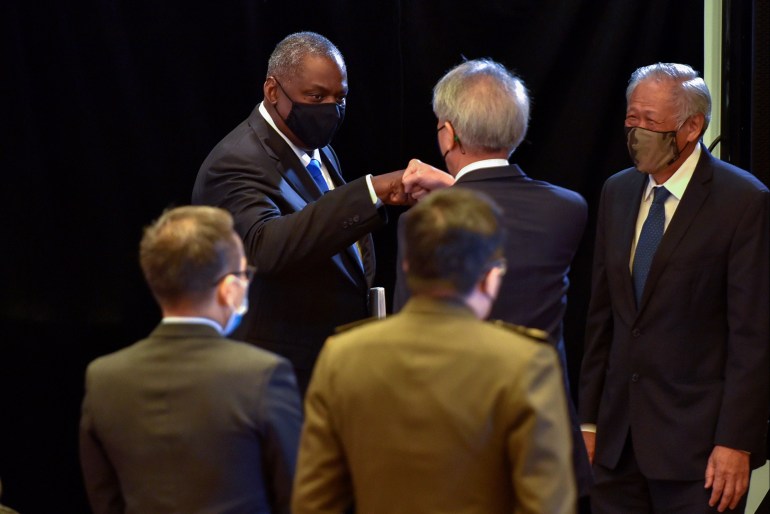 While in Hanoi, the defence chief is also expected to sign a “memorandum of understanding” for Harvard and Texas Tech University to create a database that would help the Vietnamese search for those missing from the war, a senior US defence official, speaking on condition of anonymity, told Reuters.

Austin’s visit comes as Vietnam is in the grip of a coronavirus surge, with Hanoi and half the country in lockdown.

On Sunday, the US shipped three million doses of the Moderna COVID-19 vaccine to Vietnam, raising the amount it gave via the global COVAX vaccine scheme to five million doses.

There are, however, some limits to how fast and far the Vietnamese were comfortable with deepening ties.

Experts say there are lingering concerns in Vietnam about Biden’s predecessor, Donald Trump, withdrawing from the Trans-Pacific Partnership trade pact in 2017.

There are also questions about how the US will press Vietnam over its human rights record.

Vietnam has undergone sweeping economic reforms and social change in recent decades but the ruling Communist Party retains a tight grip over media and has little tolerance for dissent.

“We will discuss those values with our friends and allies everywhere we go and we don’t make any bones about that,” Austin said in Singapore.

This month, Marc Knapper, Biden’s nominee to be the next US ambassador to Vietnam also promised to boost security ties but said they could only reach their full potential if Hanoi made significant progress on human rights.

After Vietnam, Austin is scheduled to fly on Thursday to the Philippines, which has accused China of repeated incursions into its territorial waters in the South China Sea.