Day and night, the dead are delivered into the tawny Amazonian earth – the latest victims of a devastating pandemic now reaching deep into the heart of the Brazilian rainforest.

On Sunday 140 bodies were laid to rest in Manaus, the jungle-flanked capital of Amazonas state. On Saturday, 98. Normally the figure would be closer to 30 – but these are no longer normal times.

Day and night, the dead are delivered into the tawny Amazonian earth – the latest victims of a devastating pandemic now reaching deep into the heart of the Brazilian rainforest.

On Sunday 140 bodies were laid to rest in Manaus, the jungle-flanked capital of Amazonas state. On Saturday, 98. Normally the figure would be closer to 30 – but these are no longer normal times.

Freitas – who believes his mother contracted Covid-19 after being admitted to hospital following a stroke – recalled watching in despair as her remains were lowered into a muddy trench alongside perhaps 20 other coffins.

“They were just dumped there like dogs,” he said. “What are our lives worth now? Nothing.”

“We aren’t in a state of emergency – we’re well beyond that. We are in a state of utter disaster … like a country that is at war – and has lost,” he said.

“It’s tragic surrealism ... I can’t stop thinking about Gabriel García Márquez when I think about the situation Manaus is facing.” 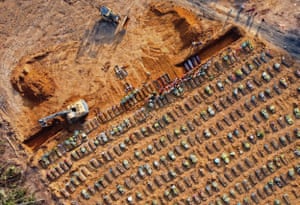 Aerial view of coffins being buried at an area where new graves have been dug at the Parque Tarumã cemetery in Manaus. Photograph: Michael Dantas/AFP via Getty Images

The coronavirus appears to have reached this isolated, riverside metropolis of more than 2 million people on 11 March, imported by a 49-year-old woman who had flown in from London.

Six weeks later it is taking a terrible toll, with gravediggers so overworked that two men were this week forced to bury their own father.

“Manaus is in a race against time to avoid becoming the Brazilian version of Guayaquil,” one local newspaper, A Crítica, warned last week in reference to the Ecuadorian city where bodies have been left rotting in the streets and thousands are feared to have died.

With more than 100 people dying each day and Manaus’s overwhelmed authorities performing nighttime burials, many fear it is already too late.

City officials say they expect to bury up to 4,500 people in the next month alone. Funeral homes have warned they will run out of wooden coffins by this weekend.

In Parque Tarumã – Manaus’s biggest cemetery – excavators have carved out mass graves called “trincheiras” – trenches – in which the dead were being stacked in three-high piles until a revolt from mourning families saw the practice halted.

“It’s chaos in there,” said Freitas, whose 58-year-old mother was consigned to the trenches last week. “She spent her whole life working … she paid all of her taxes. She deserved more. We all do.”

Edmar Barros, a local photographer who has been documenting the burials, said he had never seen anything similar. “It’s absurd what is happening here,” he said. “It’s a situation of just devastating sadness.” 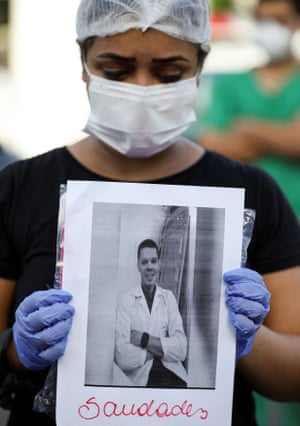 A healthcare worker pays tribute to co-workers that have died from Covid-19 in front of the 28 de Agosto hospital in Manaus, on Monday. The sign reads: ‘Miss you.’ Photograph: Bruno Kelly/Reuters

Emergency and health services in Manaus are also buckling under the strain, with ambulances roaming for up to three hours in search of hospitals with space to admit the patients they have collected.

Gruesome video footage has emerged from hospitals showing corridors lined with corpses shrouded in body bags and sheets. Another video shows an unconscious patient with his head wrapped inside a ventilator hood improvised from a large plastic bag.

“There’s a shortage of mechanical ventilators, of oxygen, of staff, of stretchers. Everything is lacking,” said Dr Domício Magalhães Filho, the technical director of the ambulance service, Samu.

One is that the coronavirus epidemic has struck at the tail end of the rainy season, when respiratory illnesses are rife and hospitals already stretched. Another is that Manaus’s chronically underfunded health service was poorly equipped and understaffed even before medical workers began contracting Covid-19 themselves.

But many also blame corruption and the government’s failure to effectively implement containment measures once Covid-19 was detected. Only on 23 March – 10 days after the first case was confirmed – did the state governor declare a state of emergency, ordering all non-essential businesses to close.

“We took too long to ask people to stay at home,” said Leonardo Steiner, the archbishop of Manaus, which is a four-hour flight north of São Paulo.

Even now, with the death toll soaring, social distancing is being flouted in some areas on the city’s outskirts, with huge queues outside banks and locals refusing to wear masks or remain at home. 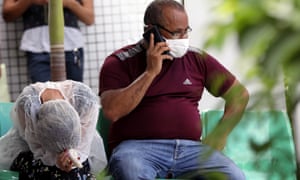 “Part of the city seems like it couldn’t care less – it’s as if nothing is happening,” said Barros, the photographer.

The mayor admitted he had failed to keep people indoors but said Brazil’s president, Jair Bolsonaro, should shoulder much of the blame for deliberately undermining such measures. “We don’t have hurricanes here. We don’t have tsunamis. Here the tsunami was having disregarded … social isolation.”

“It saddens me to know these lives could have been saved and weren’t saved, in part because Brazil’s main leader … said it was OK to go out,” Virgílio added.

Marcia Castro, a Harvard University demographer who specialises in public health in the Brazilian Amazon, said it was unrealistic to expect people to follow health ministry advice when 43% of residents didn’t even have access to water to wash their hands. “What this pandemic is doing is throwing wide open the inequalities that have existed for so long,” said Castro, whose studies suggest Manaus’s health system will collapse further in the coming days.

Of the 5,000-plus Covid deaths officially confirmed in Brazil only 274 have been recorded in Manaus. But the recent surge in burials leaves no doubt the real total is far higher.

Twenty-four hours after Rosemeire Silva’s interment, another local woman, 53-year-old Amália Brandão Ribeiro, was rushed unconscious to hospital suffering Covid symptoms – in the front seat of an Uber taxi, since no ambulances were available.

Ribeiro’s frenzied arrival was caught on camera – with weeping relatives pleading for help before her lifeless body was eventually hauled inside by staff.

“They never even brought a trolley,” said Paula Ribeiro, her daughter. 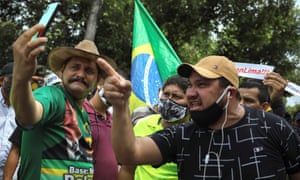 Supporters of the far-right president, Jair Bolsonaro, protest against the recommendations for social isolation of the governor of Amazonas Manaus on 19 April. Photograph: Bruno Kelly/Reuters

Ribeiro was declared dead soon after, with the cause listed as “unknown”. But it was two days before her children could bury her at the Parque Tarumã – one of 128 funerals that day. The confusion was such that officials initially released a man’s corpse to her family before the mistake was realized.

Freitas said he knew little of the ailment that had robbed him of his mother.

“It comes from China, doesn’t it?” he said vaguely on Tuesday as President Bolsonaro sparked outrage by shrugging his shoulders at the country’s dead.

“All of us are afraid because we don’t know what tomorrow might bring,” Freitas said. “Today we’re alive. Tomorrow we just don’t know.”