Around seven years ago, I couldn’t decide what to buy Mr Foodie for his birthday. I came up with three options: a trip to Dublin (to visit his Irish roots), a skydive, or a trip to Hamburg. I put each choice in an envelope with

Around seven years ago, I couldn’t decide what to buy Mr Foodie for his birthday. I came up with three options: a trip to Dublin (to visit his Irish roots), a skydive, or a trip to Hamburg. I put each choice in an envelope with an image on the front, feeling sure he would pick one of the city trips. He picked the skydive. My heart sank. I was just past 30 and feeling my mortality – in that moment I realised there was no way I could jump out of a plane with him. To this day, I never have taken him skydiving… In the end, we went to Dublin (I know, I am such a chicken) and put the Hamburg trip on the back-burner for a later date. So when I was contacted about a press trip to the north German city, I jumped at the opportunity. For 48 hours, I ate and drank my way around as many Hamburg restaurants and bars as I could… And here’s the result: my foodie guide to restaurants in Hamburg.

Where to Eat: Hamburg Restaurants

When I asked people what Hamburg’s cuisine is known for, I got three clear messages: seafood (Hamburg is a harbour city), Franzbrötchen (cinnamon buns) and Labskaus (a potato/corned beef/egg dish). The prevalence of fish is evident across the city’s menus everywhere, but you mustn’t leave Hamburg without trying their Fischbrötchen (fish rolls). Plus, the local Bäckereien (bakeries) won’t disappoint you in your mid-morning quest for a cinnamon bun with your coffee. Labskaus is a little harder to come across, but we’ve got you covered. So let’s get down to foodie business…

In the Oberhafen area, you can’t get more local than Hobenköök – a food hall and restaurant in one. Pop in before 8 pm to stock up on produce from the region, or show up for dinner at the restaurant in the other half of the same building. We tried an insanely delicious selection of cheeses from the area, as well as a veggie starter of carrots and fermented cabbage – about a hundred times better than that description makes it sound. On the seafood front, I also ate some North Sea cod with local shrimps, and drank several glasses of Dornfelder (a native red grape). Dinner at Hobenköök doesn’t come cheap – we paid €135 between two – but it’s worth it for the quality of the ingredients.

While many restaurants in Hamburg are serving traditional Fischbrötchen, UNDERDOCKS are doing them a little differently. Think long sesame buns loaded with seafood (of course) but also with “dirty upgrades” like jalapenos, mozzarella and Louisiana-style spices. Plus, try their fries – sliced, sautéed potatoes loaded with cheese and served with an aji-mayo dipping sauce. Wash it all down with a half-litre of the local Pilsner and you can’t go wrong. 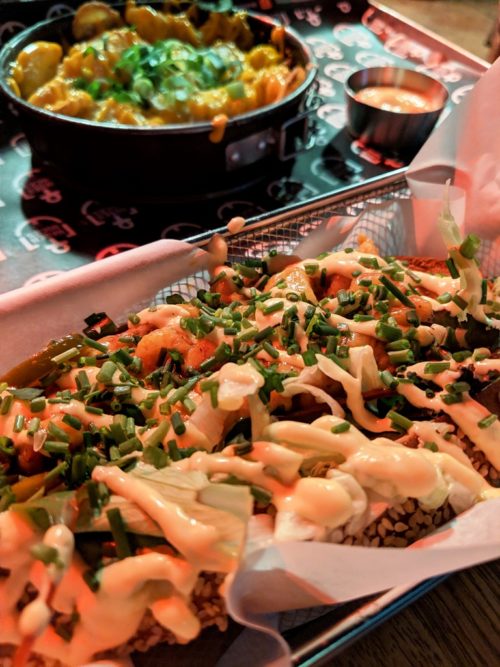 I’d venture to guess that Labskaus is an acquired taste – mostly because it’s not the prettiest dish to look at. The main substance of it is a pink purée of potatoes and corned beef – it tastes a lot like the inside of a bitterbal, for those of you who are more familiar with Dutch food. On top are served two fried eggs, and on the side some pickled beetroot and gherkins. I guess it counts as a brunch dish, so long as you’re not too hungover for the texture. “Mushy” is the word that springs to mind, but if you’re an intrepid food explorer I’m sure you’re up to the challenge! Try the traditional version at the Old Commercial Room, which looks like it hasn’t changed in a hundred years. The local Ratsherrn beer has good hair-of-the-dog properties too… 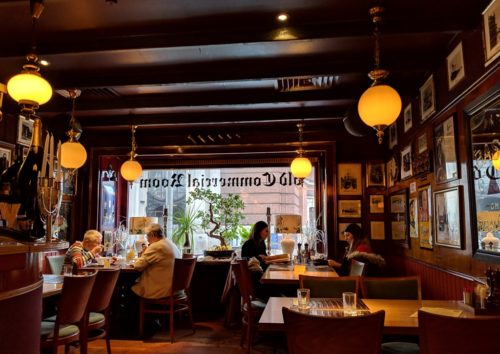 Traditional interior at the Old Commercial Room (prettier than Labskaus!)

You can’t visit Hamburg without eating a hamburger, right? Right. So be kind to your wallet and pop into the Better Burger Company for a hearty burger with five toppings of your choice for €6.90. Simple but decent, cheap but cheerful, and right in the centre of town. 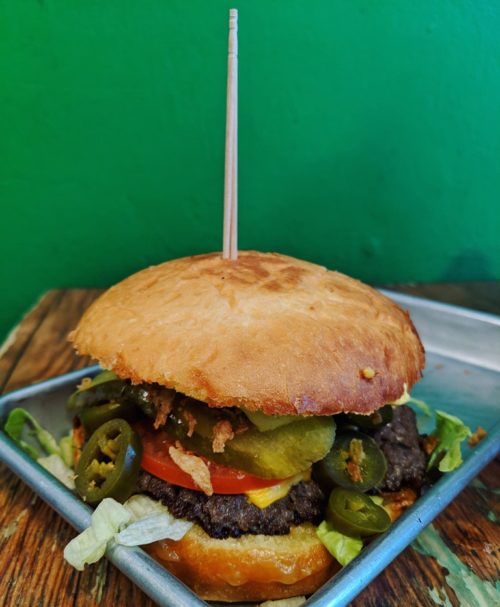 After a stroll around the shops of the Sternschanze neighbourhood, pop into Vietnamese BAN CANTEEN for lunch. Here, €10 will net you one of their generous ban bowls and a fresh ice tea. I tried the rice noodles topped with marinated beef, carrot, cucumber, lettuce and plenty of herbs, topped off with various sauces, from chilli to hoisin. 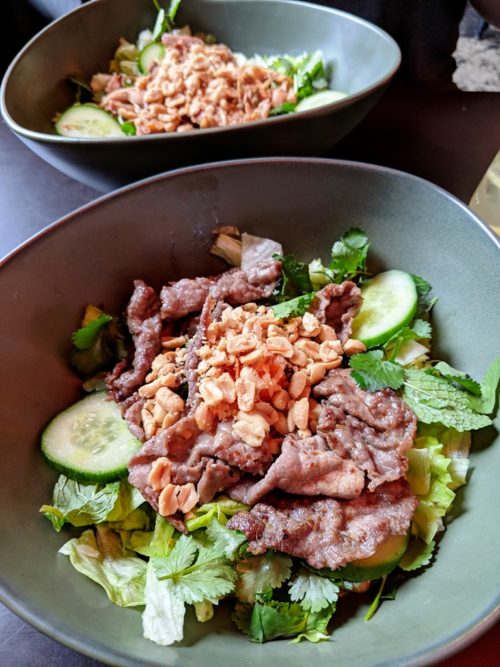 Where to Drink: Hamburg Bars

When in Hamburg, do try the local Ratsherrn beer. I particularly liked their Rotbier (red beer), but there are of course plenty of Pilsner-style beers as well. The German wine I drank at Hobenköök (see above) was also excellent – a light, fruity Dornfelder from Pflüger. But the cocktail scene is picking up pace here too – I particularly enjoyed the little enclave of bars around Paul-Roosen-Straße, a stone’s throw away from the hubbub of St. Pauli but infinitely more pleasant. Try Roosen Bar or clockers (see below). 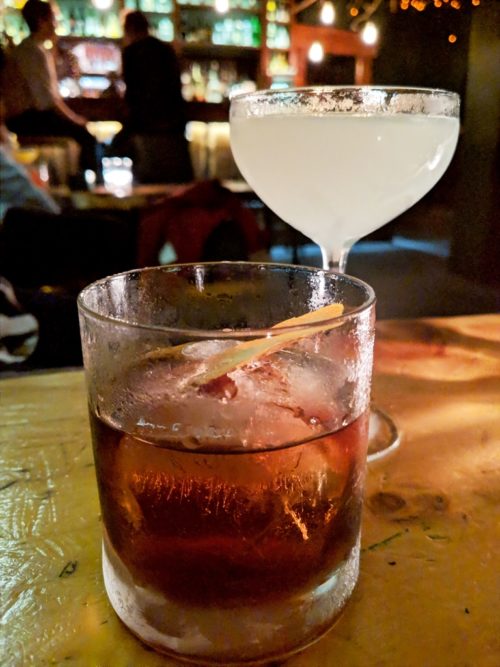 Hidden behind a red door, with no frontage on the street at all, clockers bar feels like the original hidden gem. Inside, the bar is darkly lit, decorated with a full-blown tree apparently growing in the middle of it (and twinkling with fairy lights). Try the Mezcalita (a smoky take on a margarita) or the Lions Roast – what would happen if an Old Fashioned and an Espresso Martini had a love-child.

Where to Sleep: Heikotel – Hotel am Stadspark

The Heikotel (whose sub-title – Hotel Am Stadtpark – provides the clue) is excellently located near the city park and costs from €80 a night for a double room. Situated in the Winterhude neighbourhood, it’s a five-minute walk from the U-bahn (metro) station, with trains taking you into the centre in 15 minutes.

For more information, visit the Heikotel – Hotel am Stadspark’s website, and read my full post about the hotel here.

What to Do: HafenCity RiverBus

Woman cannot live by bread (and fish, and cheese, and wine) alone. Well, actually she kinda can, but even the foodiest amongst us occasionally wants to do something other than eat. There are plenty of harbour tours in Hamburg, but for something a little different try the HafenCity RiverBus. You’ll board in the World-Heritage Speicherstadt (the stunning warehouse district that’s worth exploring), and the bus will take you through Hamburg’s lesser-known neighbourhoods until (wait for it…) it suddenly turns into a boat! The drive into the harbour and out again takes around an hour and a half in total; note that tours are in German but the guide is happy to give explanations in English if needed. 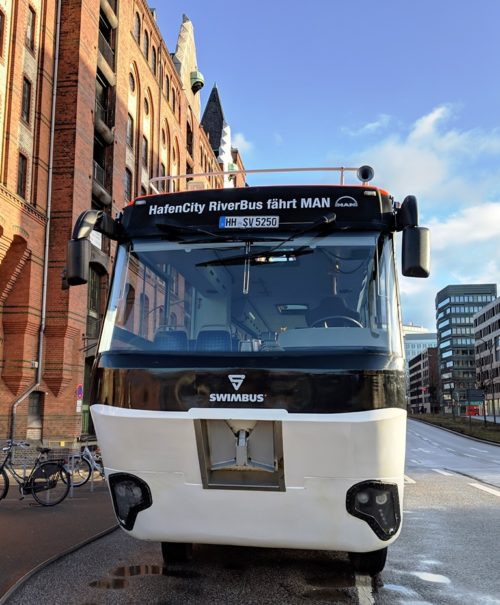 All aboard the amphibious HafenCity RiverBus!

My trip to Hamburg was organised with help from Gute Leude Fabrik as part of their “Come to Hamburg” programme, with accommodation provided by the Heikotel – Hotel am Stadtpark.