President Kabore has promised to secure the country and is vying for another five years against 12 other candidates.

Voters have gone to the polls on Sunday in Burkina Faso for presidential and legislative elections that have been marred by ongoing violence in the landlocked West African nation.

President Roch Marc Christian Kabore has promised to secure the country and is vying for another five years in power against 12 other candidates.

Kabore is expected to win but the opposition hopes to split the vote, depriving him of the 51 percent support needed for an outright victory in the first round. It then plans to form a coalition behind the strongest opposition candidate for the second round of voting.

Campaigning ran alongside continued bloodshed and the fear of attacks by armed groups on voting day was prevalent.

Fourteen soldiers were killed in an ambush in the north claimed by ISIL (ISIS) earlier this month, one of the deadliest attacks on the military in five years of rebellion. 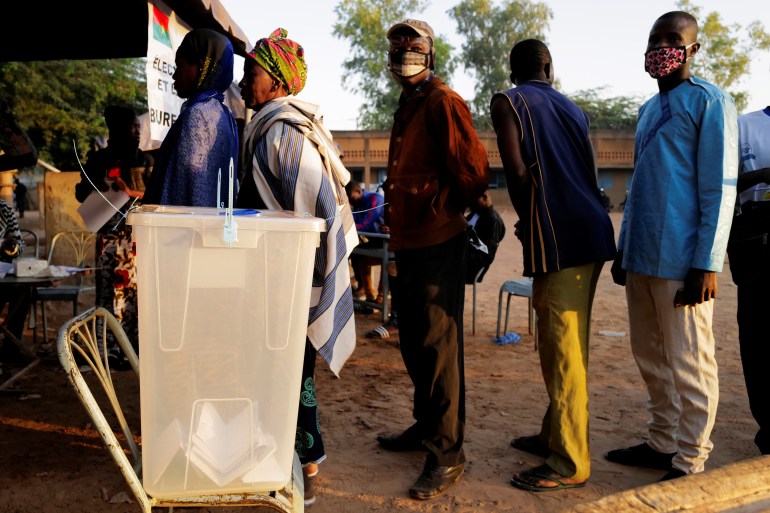 People queue at a polling station during the presidential and legislative election in Ouagadougou, Burkina Faso [Zohra Bensemra/Reuters]Violence in the north – as in neighbouring Sahel states Mali and Niger – has become intertwined with clashes between ethnic groups.

The Fulani community has in particular been targeted for recruitment by fighters, and attacks regularly spark reprisals, continuing the cycle of violence.

Humanitarian groups have condemned massacres of Fulani civilians by pro-government militias or the army.

Compaore, who was overthrown by a popular uprising in 2014 after 27 years in power, is now in exile. 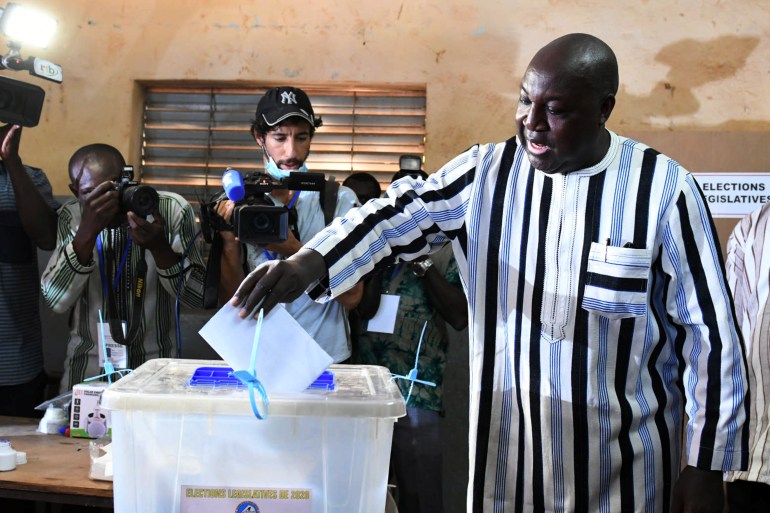 Presidential candidate Zephirin Diabre votes during the presidential and legislative election at a polling station in Ouagadougou [Anne Mimault/Reuters]Diabre told reporters on Saturday “there is a huge operation orchestrated by those in power to carry out a massive fraud” so as to give Kabore a first-round victory.

“We will not accept results marred by irregularity,” added Diabre, surrounded at a press conference by five of the 11 other opposition candidates, including Komboigo.

Crisis rooms have been set up around the city, where organisations can monitor voting to check for irregularities, voter suppression and violence, according to Codel, a local organisation focused on elections.

‘Vote for change in this country’

Dozens of people lined up at polling stations in the capital, Ouagadougou, before sunrise on Sunday.

Oumar Zorome, 55, was the first to vote in the city’s Patte D’Oie district and is backing Kabore, who he says has built roads and is not responsible for the country’s struggles with insecurity.

“I’m voting for the change in this country that’s already been taking place to continue,” he said. 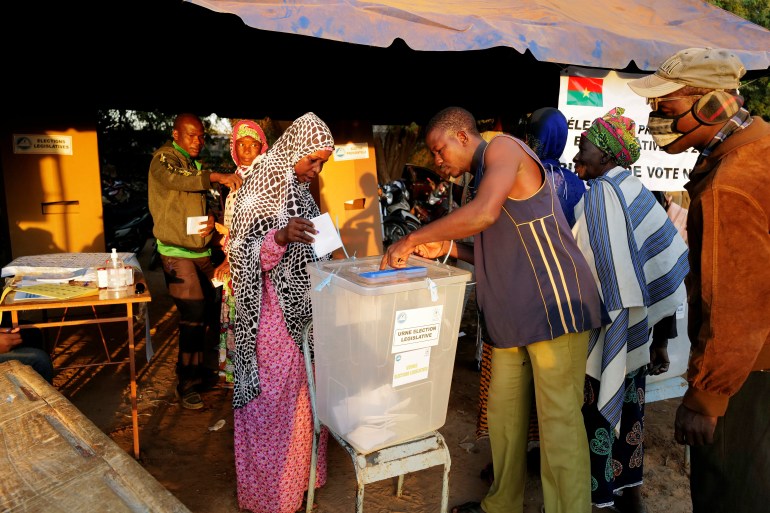 One voter shows another how to cast her vote at a polling station during the presidential and legislative election in Ouagadougou [Zohra Bensemra/Reuters]Voting also began in violence-scarred regions in the country where just weeks ago officials were not sure it would be possible to vote.

In Barsalogho in the country’s Center North region, more than 60 people were in line when the polls opened amid added security, according to an official.

“I’m surprised. I didn’t think we’d be able to vote but things are calm so far,” Saidou Wily, a government official in Barsalogho, told The Associated Press.

Violence linked to al-Qaeda and ISIL has displaced more than one million people, and cut off swaths of the country, preventing at least 166,000 new voters from being able to register, according to election officials.

Results are expected in the next few days.