'When something happens to a bus driver, you feel quite attached to them'

Although providing a vital service offers them a sense of normality and purpose in challenging times, bus drivers in Manchester have said the death toll among their workforce is an increasing source of anxiety.

Related: Calls to include bus drivers in £60k payouts for coronavirus deaths

Although providing a vital service offers them a sense of normality and purpose in challenging times, bus drivers in Manchester have said the death toll among their workforce is an increasing source of anxiety.

Tracy Farrell has been a bus driver along First Group’s Vantage route – which takes mostly commuters from Leigh, in Wigan, to Manchester city centre – for six years, but she has never seen days like those she has experienced in lockdown.

“We’re still taking people to work but our passenger numbers have dropped by around 90%,” said Farrell. When night falls, passengers are even scarcer and the work can be “eerie and isolating”.

Though Farrell misses having longer chats with customers and waving to other bus drivers when the roads are busier, loneliness is the least of her worries when it comes to work.

Trying to protect herself from contracting coronavirus armed only with sanitiser is at the forefront of her mind. Rising deaths of London bus drivers has also exacerbated her anxiety. “When something happens to a bus driver, no matter where it happens, you still feel quite attached to them,” said Farrell. “It does filter through to us all and it is a very worrying time.”

As a result of not being able to do overtime due to lower passenger numbers, Farrell’s working hours have dropped from 45 a week to 38.

But shows of support from the public have helped to boost her morale. “Last week, I got an applause as I drove past Salford Cathedral and people are always waving from the street,” she said.

Adding to her sense of pride is the fact that her 23-year-old daughter is a newly qualified junior doctor about to head out to work in a hospital. “I’m so proud of her, and I’m proud that I’m helping too because it’s people like her that I’m taking to work every day.” 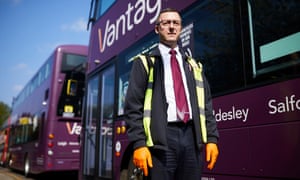 Szabo, who has worked on the same route as Farrell since January, said he was also finding it difficult to adapt to quieter roads and lower passenger numbers. “It’s very, very quiet. I’d say it’s quite boring to be honest,” said Szabo.

But although he longs for the days when he can exchange more than a few brief words with regulars, right now he is focused on trying to lessen his risk of catching the coronavirus.

He regularly douses his cabin in sanitiser, while the holes in its assault shield – which would usually allow him to be heard more clearly by passengers – are blocked up.

But there is only so much he can do to influence the behaviour of others. “Most of our customers are sticking to the rules and staying well away from each other, but there are some who are too impatient to even let other passengers off the bus before they get on,” he said.

The World Health Organization is recommending that people take simple precautions to reduce exposure to and transmission of the coronavirus, for which there is no specific cure or vaccine.

The UN agency advises people to:

Many countries are now enforcing or recommending curfews or lockdowns. Check with your local authorities for up-to-date information about the situation in your area.

In the UK, NHS advice is that anyone with symptoms should stay at home for at least 7 days.

If you live with other people, they should stay at home for at least 14 days, to avoid spreading the infection outside the home.

Although he hasn’t received grand gestures of thanks – such as Farrell’s applause – he is grateful for small acts of kindness. “Elderly passengers will often say thank you, it’s very nice,” he added.

Before the crisis began, Szabo, who lives alone in Middleton, planned to return to his home country of Hungary to visit his brother and sister, after putting off a trip last year. Now, although daily calls from them help abate loneliness, most of their conversations are about his line of work.

“They’re concerned for me because they understand that I’m on the frontline so the risks are high for me to catch the virus,” he said.