While the west fixates on Covid-19, vulnerable countries pay the price

The developed world’s response to the pandemic is imperilling health systems, economies and livelihoods already on the edge

People in low-income and conflict-affected countries have so far largely escaped the high levels of Covid-19 infection seen in western Europe and the US, although this may be changing.

The pandemic is killing them in different ways: lost jobs, ruined businesses, increased poverty, rising malnutrition and risk of famine, and a prospective increase in untreated, non-Covid preventable illnesses.

For many of the most vulnerable, the developed world’s cures are proving worse than the disease. At the extreme, families must choose between going hungry and getting ill.

People in low-income and conflict-affected countries have so far largely escaped the high levels of Covid-19 infection seen in western Europe and the US, although this may be changing.

The pandemic is killing them in different ways: lost jobs, ruined businesses, increased poverty, rising malnutrition and risk of famine, and a prospective increase in untreated, non-Covid preventable illnesses.

For many of the most vulnerable, the developed world’s cures are proving worse than the disease. At the extreme, families must choose between going hungry and getting ill.

And their plight is exacerbated by Covid-style “underlying conditions” – chronic, pre-existing political, security, economic, and climate problems that grow ever more unsustainable.

A Covid tidal wave may be about to hit sub-Saharan Africa and other less resilient regions, the International Rescue Committee warned last week. Without urgent international action, the virus could cause 1bn infections and 3.2m deaths in 34 fragile states, including Afghanistan and Syria, it said.

For millions of workers, no income means no food, no security, and no future Guy Ryder, International Labour Organization

According to UN estimates, half a billion people, or 8% of the world’s population, could be pushed into destitution by the year’s end, largely due to the pandemic. The fight against poverty would be set back 30 years.

The crisis could produce famines of “biblical proportions”, with the number of people facing hunger almost doubling to more than 250 million, the World Food Programme (WFP) said. Shortfalls in donor funding and food aid meant 30 million people could die within a matter of months, it added.

The Democratic Republic of the Congo, Sudan, South Sudan, Nigeria, Venezuela and Haiti are among the countries most at risk, the WFP said: “Millions can only eat if they earn a wage.”

War-torn Yemen is worse off than most. About 12 million Yemenis rely on food aid that is threatened by renewed fighting. A repeat cholera outbreak is under way. The detection last week of a Covid-19 cluster in Aden may be the least of its worries.

South Sudan is another conflict-scarred country with little or no capacity to handle a Covid-19 emergency. In 2019, 61% of the population faced food insecurity. Drought and locust infestations were contributory factors.

Yet with only 34 confirmed Covid cases so far, and no deaths, South Sudan’s main worry at present is the pandemic’s indirect impact on humanitarian aid, food supply and livelihoods.

This perspective is shared by many in South Africa, the continent’s second largest economy. The official death toll is just over 100, yet the government’s lockdown is said to be costing £570m a day. Some restrictions were eased last Friday amid fears that 1.7 million people could lose the means to make a living.

Looked at globally, the pandemic’s impact on jobs is devastating. The International Labour Organization reported last week that 1.6 billion workers in the informal economy – nearly half the world’s total workforce of 3.3 billion – “stand in immediate danger of having their livelihoods destroyed”. 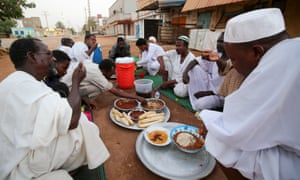 Sudanese men break their Ramadan fast in the capital Khartoum. The country is among those most at risk, according to the World Food Programme. Photograph: Ashraf Shazly/AFP via Getty Images

“The first month of the crisis is estimated to have resulted in a drop of 60% in the income of informal workers globally. This translates into a drop of 81% in Africa and the Americas,” it said.

If lockdowns continue or expand, this situation will only get worse. More than 436 million enterprises were at risk, the ILO’s Guy Ryder said. “For millions of workers, no income means no food, no security, and no future.”

The west’s self-absorption threatens to obscure the virus’s harmful impact on treatment of non-Covid, preventable diseases. Just as UK cancer deaths are forecast to rise due to a diversion of resources, so measles and other immunisation programmes in poorer nations are being undercut.

The WHO announced last week that polio vaccinations for up to 12 million children in Africa will be delayed as resources are switched to fighting Covid-19. It admitted the move would inevitably lead to more child polio cases.

The pandemic is providing cover for malign governments to pursue or accelerate policies that place lives at risk, regardless of Covid-19. A striking example is Myanmar, where the army has renewed its repression of minorities in Rakhine and Chin states.

And Kashmir reveals more Covid collateral damage. The continuation of last year’s illegal Indian government lockdown is now justified by the need to contain the disease. Spiralling mental health problems, including depression, anxiety, suicide, and domestic violence, are among the results.

Not to be left out, the Trump administration is ignoring a UN call to lift sanctions on struggling, virus-hit countries such as Iran, Cuba and Venezuela while also blocking a global ceasefire.

World Bank and IMF billions offered in assistance and debt relief to poorer countries and fragile states cannot begin to repair all this hurt. Right now, western responses to the virus are imperilling more people worldwide than the virus itself.