Donald Trump’s musing over whether cleaning people’s lungs with disinfectant might treat the coronavirus caused a furore but it may be the US president’s pushing of anti-malarial drugs that does far more lasting damage to his administration.

Donald Trump’s musing over whether cleaning people’s lungs with disinfectant might treat the coronavirus caused a furore but it may be the US president’s pushing of anti-malarial drugs that does far more lasting damage to his administration.

There is building anticipation over the content of an upcoming whistleblower complaint by Dr Rick Bright, who last week was abruptly removed as the head of the federal government office working on a vaccine for Covid-19.

It is understood that Bright is still working on the details of the complaint before lodging it with the Department of Health and Human Services’ inspector general.

Bright, a vaccines expert, has claimed he was removed as head of the Biomedical Advanced Research and Development Authority (Barda) because he resisted an effort to expand the use of hydroxychloroquine and chloroquine to treat Covid-19. The drugs, approved to treat malaria, have yet to be proven effective for this new use but have been repeatedly promoted by Trump, who has called them a “game-changer”.

“I am speaking out because to combat this deadly virus, science – not politics or cronyism – has to lead the way,” Bright said in a statement, adding he was concerned about “efforts to fund potentially dangerous drugs promoted by those with political connections”. 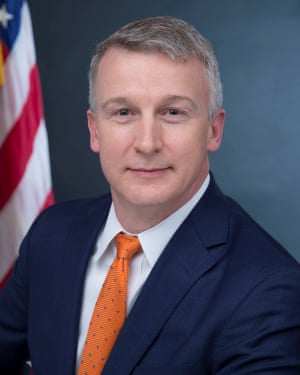 Bright’s lawyers, Lisa Banks and Debra Katz, subsequently claimed their client was pushed out of his job solely because he “resisted efforts to provide unfettered access to potentially dangerous drugs, including chloroquine, a drug promoted by the administration as a panacea, but which is untested and possibly deadly when used improperly”.

It is expected that Bright’s complaint, when revealed, will shed new light on the political pressure exerted by the Trump administration on health officials to back up the president’s sweeping praise of the drugs as a key weapon against Covid-19.

According to reporting by outlets including Vanity Fair, administration officials pushed for the widespread use of hydroxychloroquine, despite the FDA’s warnings, while also formulating a narrative where Bright was shifted from his role after mistreating his staff. His lawyers reject this characterization.

The battle between Trump and an obscure official who was in charge of a little-known office is set to touch upon broader themes that have repeatedly cropped up during this presidency, specifically the treatment of scientific advice and the use of the federal government to promote the personal views of the president over experts.

“Dr Bright is a strong scientist, he is a visionary leader, he’s able to make decisions, he get things done, and he believes and he stands on strong science,” Nicole Lurie, former assistant secretary at the Department of Health and Human Services, told CNN. “I think this is about something larger than hydroxychloroquine. I think it’s really about listening to scientific opinion, scientific perspective and standing up for strong science.”

Top officials at the Department of Health and Human Services have disputed Bright’s account, pointing out that he has been moved to an important role managing a public-private partnership on vaccine development and treatment. When asked about Bright, Trump said that he had never heard of the man heading the effort to find a vaccine for a virus that has already caused more than 60,000 deaths in the US.

The president has repeatedly advocated the use of hydroxychloroquine following a small-scale study in France that showed some patients with Covid-19 responded well after taking it. However, further studies have shown mixed or negative results, with research linking it to heart problems and other serious conditions if not administered properly.

Trump said on 19 March the drug could be “really incredible” in the fight against coronavirus and by that evening first-time prescriptions for hydroxychloroquine were 46 times the rate of the average weekday, according to one analysis. The surge in demand for the drug worried public health experts about serious harm arising from its use, as well as about people with conditions like lupus – a proven target for hydroxychloroquine – facing a shortage in supply.

Two days after Bright announcing his planned whistleblower complaint, the Food and Drug Administration (FDA) issued a warning against the use of chloroquine and hydroxychloroquine. The drugs, the regulator warned, can cause a number of side-effects “including serious heart rhythm problems that can be life-threatening”.

The FDA issued an emergency use order to allow the drugs to be used in hospitals under certain conditions but the regulator said they should not be used outside this context.

Clinical trials to establish safe use of drugs for new purposes usually take several years, a process chloroquine and hydroxychloroquine have not gone through. The drugs, the FDA states, “have not been shown to be safe and effective for treating or preventing Covid-19”.