'Why is it spreading?': fears for Newmarch House, the aged care home at the centre of Australia's Covid-19 crisis

Early on Thursday morning, Mark Fahey received a call that hit him “right between the eyes”.

His mother, 76-year-old Ann Fahey, had been found collapsed on the floor of her room at the Newmarch House aged care home in western Sydney where she is a resident.

Early on Thursday morning, Mark Fahey received a call that hit him “right between the eyes”.

His mother, 76-year-old Ann Fahey, had been found collapsed on the floor of her room at the Newmarch House aged care home in western Sydney where she is a resident.

Nurses feared she’d fallen out of bed, but when he spoke to her on the phone, Ann told Fahey that after waking during the night she’d felt tired and dizzy and had laid down on the floor.

“She had a 38.9 degree temperature so she was a bit off with the fairies, but all she kept saying was that she was tired,” he told the Guardian. “She just wanted to get off the phone and sleep.”

By early afternoon, staff confirmed what he’d feared: more than a month after the aged care home went into lockdown and after two previous tests came back negative, his mother was one of three new confirmed cases of Covid-19 recorded at Newmarch.

“I don’t understand. She was a model patient, did everything right, she’s shut herself in her room the entire time,” Fahey said.

“There’s shitloads going through my mind. Why is it still happening? … How can they still be getting new cases after this long. I mean it’s not rocket science, it’s coming in from the outside because she’s been meticulous following all their guidelines.”

The Covid-19 outbreak at Newmarch House, which has so far claimed the lives of 13 residents and threatens to overtake the Ruby Princess as Australia’s deadliest wave of the virus, began when a part-time carer worked six shifts while symptomatic and infectious.

Newmarch had already been in a type of lockdown before then. On 18 March, the national cabinet announced rules placing strict limitations on the number of visitors allowed inside aged care homes. The rules meant visits were limited to two adult visitors at one time per day inside a resident’s room.

But when the staff member returned a positive diagnosis for Covid-19 on 11 April after being told she had come into contact with a confirmed case, a flood of cases within the home were quickly discovered. On 12 April the first resident returned a positive result for the virus. Six days later, a 93-year-old man became the first to die.

Despite efforts to isolate every resident and the federal government’s introduction of surge workers from a private company, Aspen Medical, to help contain the outbreak, infections have risen steadily.

There are now 61 confirmed cases of Covid-19 related to Newmarch House, including 24 staff and 37 residents. On Wednesday, a 74-year-old man became the 13th resident to die and on Saturday, two further staff members tested positive.

New South Wales health officials have said the staff member who first became infected had experienced only extremely mild symptoms before testing positive, and the state’s chief health officer, Dr Kerry Chant, told media the woman was “mortified” when she discovered she had the virus.

In any case, the spiralling death toll inside the aged care home has left the families of some residents furious with Newmarch’s operator, Anglicare. Families have been gathering outside the facility to hold a vigil every afternoon, with some lucky enough to catch a glimpse of their relative through a window. 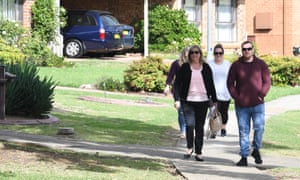 Louise Payne has been able to have a window visit with her mother at the aged care home. Photograph: Dean Lewins/AAP

This week, a group of family members published an open letter to Anglicare’s chief executive, Grant Millard, saying communication from within the home had been “far from satisfactory”.

“Phones went unanswered day after day. Calls were not returned. Details about our individual loved ones were not provided regularly,” the letter read.

“The residents were reporting that the care was inadequate and they were becoming distressed. Many of them were sick and frightened and did not have regular access to their family on the outside which increased their levels of anxiety as well as ours.”

Some family members say Anglicare has improved its communication. After the NSW opposition leader, Jodi McKay, held a press conference outside the home on Wednesday, Louise Payne, who has led much of the campaign to improve communication with families, said she’d received a phone call from Millard and been able to have a window visit with her mother.

“It was wonderful. It sounds such a little thing but I was absolutely elated because it’s been two weeks of hell not knowing how she is,” she said.

“There are no guarantees, but it’s looking like mum might be one of the ones to beat this. She’s nearly 90, so if she does it’s amazing.”

Others, however, are losing patience. Elizabeth Lane, from Windsor in Sydney’s west, takes comfort in knowing her mother, Rose Davies, 84, is still making life hard for the nurses in Newmarch.

“Mum’s always been a very difficult individual, so when they say she’s being a bit of a handful I think ‘thank god, she’s still OK’. If they told me she was being nice and cooperative I’d know something was wrong,” she told the Guardian.

Davies lives in the palliative wing of Newmarch, and suffers from dementia. She has not tested positive for Covid-19, but Lane’s voice cracks as she talks about the toll more than a month without seeing her family is taking on her mother.

“It’s heartbreaking to think this is how she’s going to end her days,” she says.

“I know this is horrible for everyone. People have already lost their family, but I can’t help thinking we may have lost our parents too. By the time we get to speak to them again, they’re not going to know who we are. For dementia patients having no contact, no stimulation, it all exacerbates their decline.” 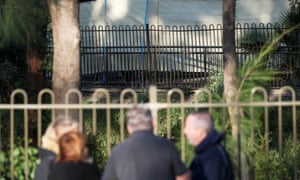 Lane says that when the outbreak occurred, she “naively” trusted that Anglicare would manage to “get on top of this”. But as the weeks have passed, her patience with the lack of communication from the home has worn out. When the aged care home provided mobile phones for residents, Lane says she discovered her mother’s hadn’t been set up for her. A number she had been calling in the nurse’s station for updates was abruptly disconnected with no warning.

“I’ve got six or seven numbers that I just call over and over until someone answers,” she said.

She was finally able to see her mother through a window on Friday, but only after she contacted the federal minister for aged care, Richard Colbeck.

“He called me and said he’d sort it out for me,” she said.

“I don’t blame the staff, this has been an absolute shitstorm, there’s no better word for it. The whole world has had trouble dealing with it. But I just think there hasn’t been a real emergency plan in place and everything feels really reactive, even now.”

You only get one mum ... It’s the worst place in Australia to be unfortunately, and I can’t get her out Mark Fahey

Matthew Fowler, whose father Lionel has so far tested negative to Covid-19 twice, says he has been frustrated at Anglicare’s management of the situation.

“It’s absolutely appalling that a worker who was sick was allowed to work six shifts there.”

On Friday, he joined the daily vigil outside the home, and said he was glad to see Anglicare had placed a senior chaplain for gathering family for the first time.

“It should have happened from the first day.”

As federal and state governments coordinate local health districts and surge staffing assistance to Newmarch, health authorities are struggling to understand how the virus is still spreading inside the heavily controlled facility.

In a statement, Anglicare said the new infections had occurred “despite us having strict procedures and enforced infection control practices in place”.

“These new cases may reflect historical transmissions and reflect the rigorous and ongoing testing at Newmarch House. We will be investigating further how this has occurred,” the statement read.

Podcast: listen to our daily episodes on Apple Podcasts, Spotify or search "Full Story" in your favourite app

On Friday, when unveiling a national code for aged care facility visitation, Colbeck said the government’s assistance to Newmarch meant it was “effectively running a mini-hospital within the facility”, but did not criticise Anglicare for its response to the situation.

“There has been no limit on the resources made available to Newmarch in managing this,” he said.

“This is not a finger-pointing or a blame exercise, it’s a very, very unfortunate circumstance where somebody who was asymptomatic, but obviously had a very high viral load, was in contact with people for six days, residents and staff, and this is the very, very tragic outcome of that.”

Earlier on Friday, Chant announced a further infection control review of Newmarch, with a particular focus on three residents who were diagnosed on Thursday but have minimal to no symptoms.

“It’s a question of whether it will be the staff that have infected the patients or whether there’s something else that we’re missing ... It’s always important to go into investigations with an open mind so you don’t miss anything,” Chant said.

For the family of some residents, the situation is become increasingly desperate.

“I sort of lost my temper with it all the other night a bit. I just think, can’t they bring the army in, get them all out of this toxic cesspit and take them somewhere else,” Mark Fahey says.

“You only get one mum. As soon as I found out, my first instinct is just to go and get her, but you can’t get into the joint. It’s the worst place in Australia to be unfortunately, and I can’t get her out.”