Wolves return to Netherlands after 140 years

Wolves return to Netherlands after 140 years BBC News The Netherlands has its first resident wolf population in 140 years, according to ecologists. Wolves were hunted out of many European countries o 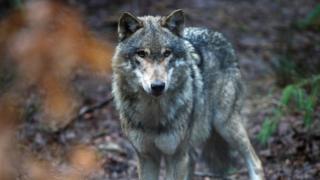 Image copyright Reuters Image caption This wolf was photographed in a wildlife park in Germany. But wild German wolves have been crossing the border into the Netherlands

The Netherlands has its first resident wolf population in 140 years, according to ecologists.

Wolves were hunted out of many European countries over a century ago but have gradually been migrating back across the continental mainland.

Occasional wolf sightings have been made in the Netherlands since 2015.

But these animals were previously thought to be animals that had crossed over temporarily from Germany and would subsequently return there.

Ecologists from campaign groups FreeNature and Wolven in Nederland have been tracking two females in the Veluwe area, collecting wolf prints and scat (droppings) from which they can identify DNA.

"It's like Tinder," said ecologist Mirte Kruit, "it can say if it's a male or female, are they single and looking for a mate and [tell you] about their family."

They've told BBC Radio 4's Costing the Earth that their data now confirms one of the females has stayed continuously for six months and can now be considered "established".

A male has also been seen in the area so the first Dutch wolf pack could be months away. They are still collecting data on the second female.

Wolves are controversial, however. In France, since returning from Italy in 1992, populations have grown rapidly. Sheep and goat farmers say they're suffering rising attacks, with around 12,000 incidents reported.

Farmers can receive compensation if they have protection measures in place, like electric fences or guard dogs, but many are still angry about the damage caused to the flock.

The French Government formed a cohabitation plan and in February last year set a target wolf population of 500 by 2023. However, it's thought this number may be reached or surpassed by this Winter. France is proposing to increase the cull rate from 12% to 17% if that's confirmed.

Wolves are protected under the Berne convention and can only be killed under specific circumstances.

Costing the Earth presenter Tom Heap travelled to Alpes de Haute Provence to meet some of those affected. The region has 22 wolf packs - the largest of any region - and last year the region saw 700 attacks.

Farmer Simon Merveille said he witnessed one of his goats being eaten by wolves.

"I was astonished because when I fired a warning shot they just stayed looking at me - they did not leave," he explained.

Mr Merveille is happy for wolves to remain in France but believes farmers must be allowed to kill them when they attack livestock.

Andre Maurelle and Ingrid Briclot, who also farm in the region, saw three wolves killing five of their sheep and taking a sixth.

They have now installed 12km of electric fences and have an apprentice shepherd, Mady, who is used to guarding cattle from lions and snakes in Mali.

"We have to learn to cohabit," said Mr Maurelle.

Back in Holland, Wolven in Nederland have been working since 2008 to prepare the Dutch people for this very moment - the return of the wolf to the country.

Ecologist Roeland Vermeulen says settled wolves are more likely to eat deer or wild boar. Sheep, on the other hand, are "like junk food", taken by roaming wolves or those less experienced at hunting.

He thinks the Netherlands has room for 22 packs - each of 5-8 wolves. Whether the country can learn from others and find a suitable balance will become apparent in the years to come.

Costing the Earth: The Wolf is Back is on BBC Sounds and on Radio 4 tomorrow at 9pm BST.