Both countries have flattened the curve, but Kiwis wonder if they have paid too high a price compared with Australians

Looking across the Tasman at their nearest neighbour’s Covid-19 elimination measures during their own strict lockdown of the past month, New Zealanders were torn: some complained that Australians were allowed to buy takeaway coffees and get haircuts under some more permissive lockdown measures. Others shuddered at pictures on social media of Sydney beachfronts thronged with people, saying the images made them “stressed” and “anxious”.

Either way, the topic of Australia’s more relaxed lockdown – and whether it would prove an economic saviour or a breeding ground for the virus – has never been far from the lips of opposition politicians, commentators, or New Zealanders stuck at home.

Looking across the Tasman at their nearest neighbour’s Covid-19 elimination measures during their own strict lockdown of the past month, New Zealanders were torn: some complained that Australians were allowed to buy takeaway coffees and get haircuts under some more permissive lockdown measures. Others shuddered at pictures on social media of Sydney beachfronts thronged with people, saying the images made them “stressed” and “anxious”.

Either way, the topic of Australia’s more relaxed lockdown – and whether it would prove an economic saviour or a breeding ground for the virus – has never been far from the lips of opposition politicians, commentators or New Zealanders stuck at home.

“I’m pleased New Zealand did the experiment,” said Peter Collignon, a professor of microbiology at Australian National University in Canberra, referring to New Zealand’s strident lockdown. “I think it actually shows that when you compare it to Australia, you can achieve the same result but without the same economic and social hardship that a complete lockdown involves.”

Both countries have been lauded internationally for their efforts to squash the coronarvirus curve, with a similar number of cases per capita (Australia’s is very slightly lower, with higher hospitalisation rates). New Zealand’s death toll from the virus is 19 compared with Australia’s 88, but it has a fifth of its neighbour’s population of 25 million.

The two countries appear to have suppressed community transmission – which was never rampant – and both have case-fatality rates for Covid-19 (the number of people who catch the virus and then die) of just above 1%, compared with 6% in the US and 13.5% each for Italy and the UK, according to the World Economic Forum. The South Pacific’s relative isolation, and the late arrival of Covid-19 to both countries’ shores – late January in Australia; late February in New Zealand – gave both a head start. 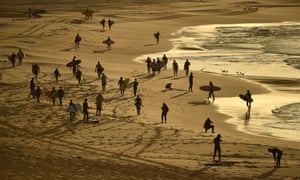 Surfers and swimmers head to the ocean after Bondi Beach reopened following a five-week closure in Sydney on Tuesday. Photograph: Peter Parks/AFP via Getty Images

Both have closed their borders to foreigners, with returning citizens and residents quarantined by the government for a mandatory two weeks.

But for those watching from New Zealand’s side of the Tasman, that was where the similarities ended – and the differences in the two country’s approaches at times seemed significant. During the past month of New Zealand’s strict, so-called “level 4” lockdown, people could only leave the house for groceries, medical help or walks. Takeaway food or meal deliveries were barred, and all shops except supermarkets and pharmacies closed.

In most Australian states, meeting a friend for a coffee was permitted, and partners or babysitters could make home visits – both verboten in New Zealand. Australian retail and construction largely remained open.

While New Zealand dropped to marginally looser, “level 3” restrictions on Monday, the Australian allowances for haircuts and meeting friends remain off-limits. Takeaway food is back on the menu, and retailers can open for online and contactless transactions, but most people are still required to remain home most of the time.

Some commentators said the New Zealand restrictions would take a starker toll on the economy and mental health.

“I’m sure many Kiwis feel frustration that we still can’t do many things Australians have done through the entire lockdown period, at great cost in terms of jobs and livelihoods, with similar health outcomes,” said Simon Bridges – the parliamentary opposition leader, from the National party – in a statement last week, as New Zealand’s daily case rate fell into the single digits.

“The severe lockdown clearly has a much wider impact because people can’t trade,” said Shamubeel Eaqub, an economist with Sense Partners in Auckland. Figures collated by his firm suggested that electronic card spending in New Zealand has halved during the strictest four weeks of lockdown measures, while the number of people claiming unemployment has already risen to just above its peak following the 2008 global financial crisis. 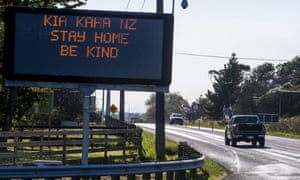 Australia has been “more generous in terms of support” such as “access to money” and “cash handouts” to businesses and the unemployed, he said. But it was too early to know which country would fare better, and there were factors other than the strictness of lockdown measures at play.

“It really depends on the health outcome,” Eaqub said. “If there are future waves of infections, then any further shutdown is going to have a really damaging effect. Businesses might be able to survive one shutdown but I don’t think they could survive two.”

Jacinda Ardern, New Zealand’s prime minister, agreed, telling voters that she did not want to see them “lose any of the gains we have made” by coming out of restrictive lockdown measures too early.

Ardern did not face the same situation Australia’s leader Scott Morrison did when deciding what level of lockdown was appropriate, said Brian Cox, an epidemiologist from the University of Otago in Dunedin. New Zealand’s “clusters” of the virus were larger, relative to population size, and tracing contacts of those infected was, initially, taking several days longer for New Zealand’s officials than those in Australia.

“You can’t compare today in Australia with today in New Zealand,” he said. “The epidemic in Australia has essentially been going for another two weeks and our epidemic was taking off a lot faster than Australia’s. We had to do a serious correction to get anywhere near where we’ve got to now.”

Analysts say both countries, in their attempt to stave off another wave of the illness, could face the same foe.

“Winter is coming,” said ANU microbiologist Peter Collignon, referring to the faster spread of the virus during the northern hemisphere’s colder weather and flu season.

“We will potentially be keeping quite significant restrictions on when we see the US and Europe relaxing them because it’s summer. That’s going to be an issue about convincing people to in fact keep on what we’re doing now until at least September,” he added.

“That’s why I don’t think a complete lockdown is an option.”