Yuan’s Hot Pot: a Taste of Chengdu in Amsterdam

I seem to have been on a bit of a Chinese food kick lately… So after sampling the dim sum at newly opened Full Moon Garden and the Peking duck at confusingly named Sichuan Food, I was ready to dip my toe (or rather, my bamboo skewer) into the hotpot at Yuan’s.

I’d been tipped off about Yuan’s Hot Pot by a foodie friend, who knew from experience that a hotpot is better shared with a group of buddies who aren’t squeamish about double-dipping. So eight of us headed to the Rijnstraat last Friday on what must’ve been one of the coldest days in May for a while – in other words, perfect hotpot weather. It was lucky we’d made a reservation, because the restaurant was packed and there was queue out the door for the next available table (it soon became apparent why). The décor is simple to the point of utilitarian, ordering is done via iPad, there are random screens showing Chinese TV, and half the clientele look to be Asian in origin. It couldn’t have got any more authentic without being literally in Chengdu. Things were off to an excellent start… 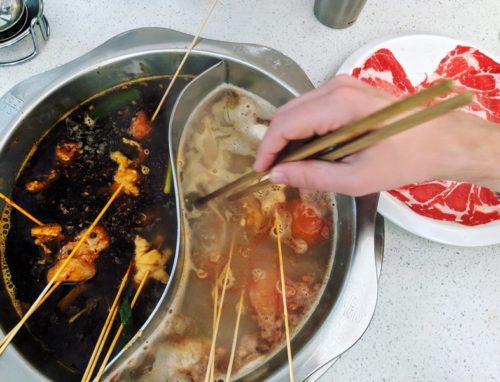 Each table comes with a hollowed-out centre in which a pot of steaming broth appears. Most people opt to keep one half of the broth non-spicy, and to have the other half topped up with a nuclear-looking chilli paste. If you’re a chilli addict like me, you’re in spice heaven. From there, you simply order a variety of meat (generally on bamboo skewers), fish, veggies, noodles and all manner of other things to throw into the pot until they’re cooked and ready to eat. It helps to have a modicum of common sense about cooking times in this situation: a thin slice of beef needs to be dipped for literally a few seconds before gobbling it straight down, whereas a skewer of chicken may take a few minutes. For adventurous eaters, there are also plenty of options to challenge your palate: think frog’s legs, chicken feet, tripe, and various organ meat. Like I said, this is about as authentic as you’re going to get in Amsterdam. 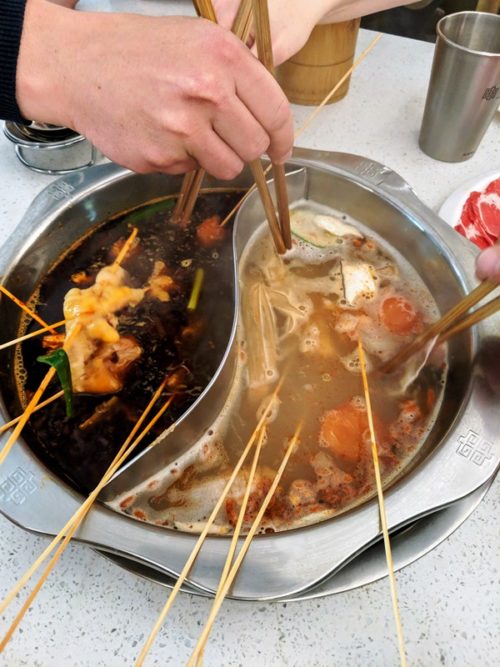 I enjoyed pretty much everything – which is hardly surprising since if you serve me anything dipped in chilli broth, I’m sold. The vegetables were a particular highlight – somehow the leaves really trapped the flavour of the broth more than the meat and fish did, which I wouldn’t necessarily have expected. The only thing I wasn’t a fan of were the noodles: made from sweet potato starch, they were glutinous to the point of being impossible to eat, and so slimy that it took several attempts just to pick them up. But that’s a small negative in an otherwise fabulous experience.

The prices at Yuan’s are insanely reasonable too: we spent €35 per person, but a) we are all big eaters; b) we kept ordering and ordering and ordering; and c) we drank boat loads of beer and white wine as well. I think the average diner could easily come away having spent €25 or less. For an experience that transports you straight to Chengdu, that’s money well spent.